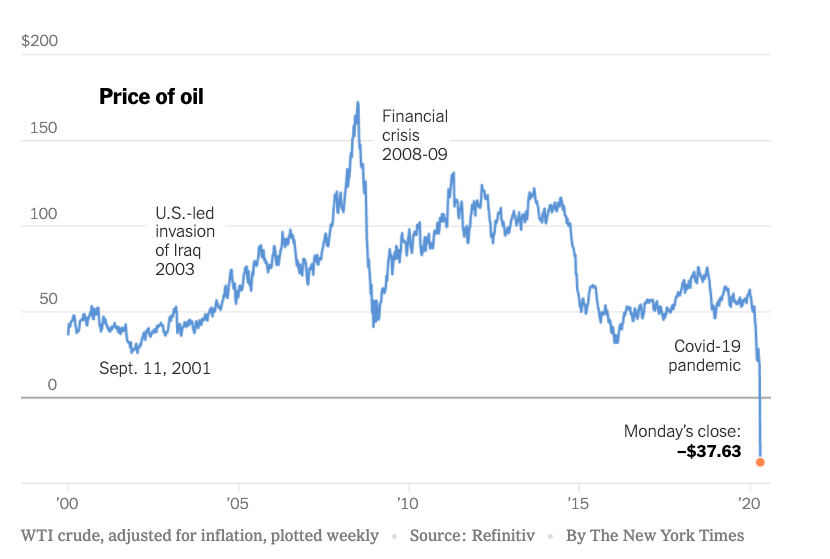 Oil price went negative on Monday (April 20, 2020), signalling no place to store all the crude the world is producing but not using.  Prices fell so much that some traders paid buyers to take oil off their hands: the price of the main U.S. oil benchmark fell more than $50 a barrel to end the day about $30 below zero, the first time oil prices have ever turned negative. Such an eye-popping slide(see graph above) results from a quirk in the oil market. Still, it underscores the industry’s disarray as the coronavirus pandemic decimates the world economy.

Global oil demand is collapsing. Despite a deal by Saudi Arabia, Russia and other nations to cut production, the world is running out of places to put all the oil the industry keeps pumping out — about 100 million barrels a day. According to energy experts, the world has an estimated storage capacity of 6.8 billion barrels, and nearly 60 per cent is filled. But it will be hard to fix the oil industry’s problems quickly.

The oil infrastructure is complicated, and it’s not easy to turn off the taps. It may be cheaper for some producers in the long run than shutting down production or finding a place to store the supply bubbling out of the ground. Many worries that shutting their wells might damage them permanently, rendering them uneconomical in the future. From the start of the year, oil sold for over $60 a barrel, but by Friday, it hit about $20.

Scott Sheffield, chief executive of Pioneer Natural Resources, told at a hearing last week that if the oil price stayed around $20 a barrel for a while, 80 per cent of the hundreds of independent oil companies in the united state would be forced into bankruptcy and 250,000 workers would lose their jobs. At $30 a barrel, many companies would be “crippled,” Mr Sheffield said. “But at least the industry will survive.”

What does it mean for an Investor? Is this a good opportunity to buy oil? Buying shares of companies in the energy sector could be risky: some might go bankrupt; overall, they are definitely building huge amounts of debt. What about the price of oil? In the medium-long term, do we expect the price of oil to grow substantially once the economy recovers? Using a terminology dear to our mentor Howard Marks, do we expect a regression toward the mean?

If we look at specific ETFs, The United States Oil Fund LP, or USO, plunged as much as 12% to hit the lowest since its 2006 inception amid a staggering sell-off in crude. According to Bloomberg, USO is a popular choice for retail investors looking to bet on short-term price reversals, buying dips and selling rallies. However, those bets soured Monday. Crude plunged as a deadly pandemic ravaging global economies threatens to erase an entire decade of demand growth, slashing thousands of jobs and wiping out hundreds of billions of dollars from company valuations. The price on the futures contract for West Texas crude due to expire Tuesday fell into negative territory for the first time. “Traditionally, this product is used to play mean reversion. It also attracts outsiders whenever the oil is so low it makes the nightly news,” said Eric Balchunas, an analyst at Bloomberg Intelligence. The giant USO’s drop is “basically an overcrowded bottom-calling trade gone bad.”

Forbes contributor Jim Collins mentions the possibility that the Fed could start buying USO (United States Oil ETF).  As the Fed’s current buying remit includes bond ETFs, LQD (high-grade) and HYG (high-yield), I see no Fed’s barrier to buying another ETF. Aside from even more government overreach, though, “the solution to low oil prices is, as they say in Houston, low oil prices”.  As marginal U.S oil production drops to zero and production curtailments by OPEC+ hit the markets, the oil will once again become a scarce good as global economies begin to recover from COVID-19 lockdowns in the second half of 2020.

In the meantime, we can expect daily changes to the price and monitor the adjusted forecasts of Walletinvestors.com: 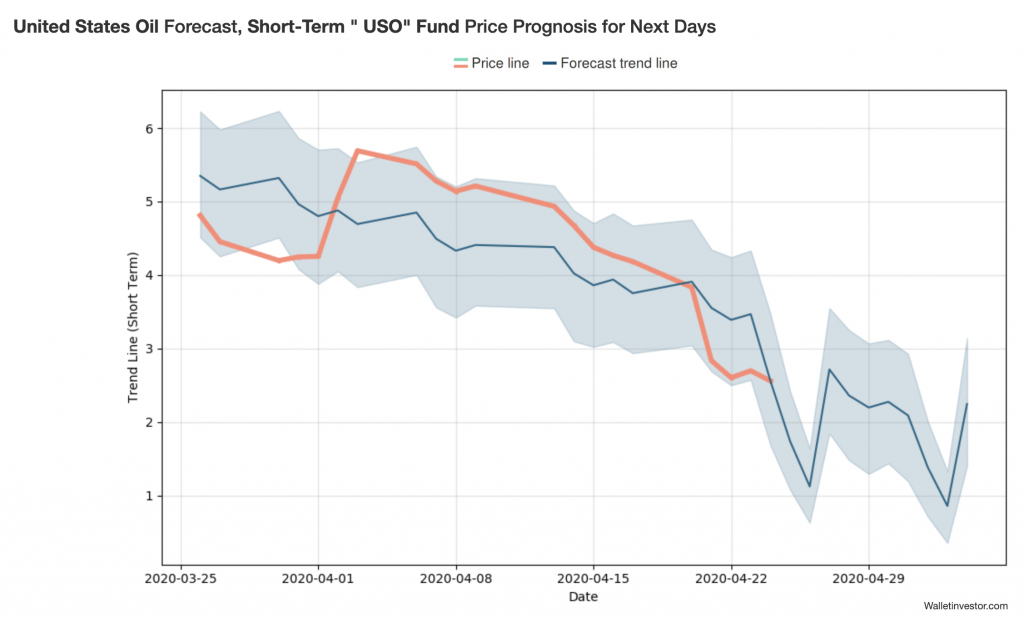 Link to the updated page: walletinvestors.com 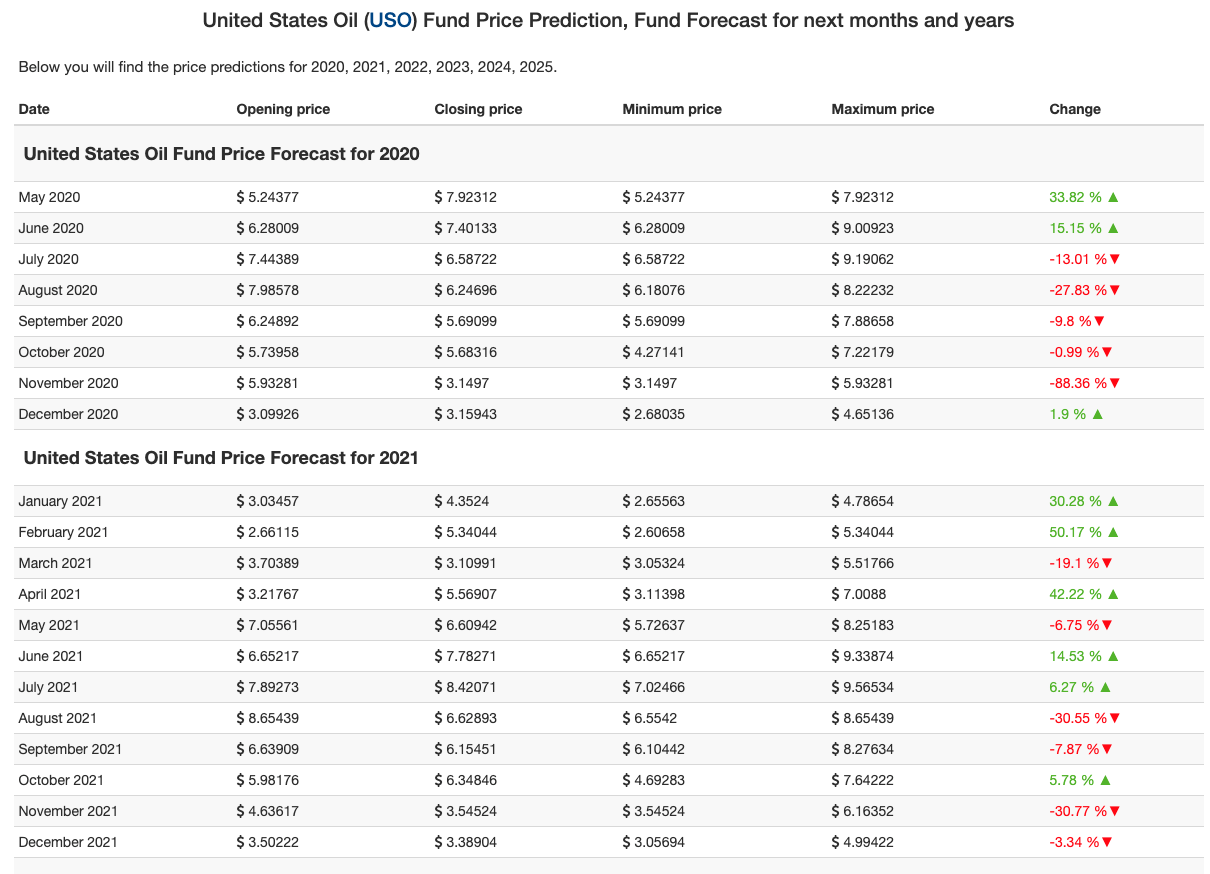