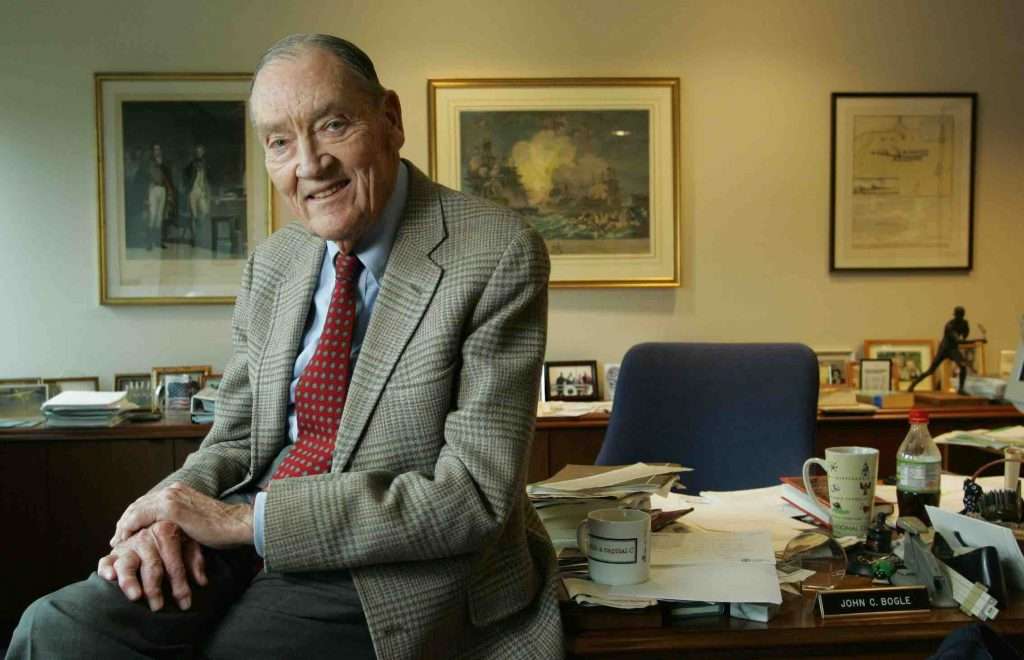 John C. Bogle is the founder of The Vanguard Group. He is credited for creating the first Index fund. He delivered this speech as the commencement address for MBA graduates of the McDonough School of Business at Georgetown University in May 2007.

Here’s how I recall the wonderful story that sets the theme for my remarks today: At a party given by a billionaire on Shelter Island, the late Kurt Vonnegut informs his pal, the author Joseph Heller, that their host, a hedge fund manager, had made more money in a single day than Heller had earned from his wildly popular novel Catch 22 over its whole history. Heller responds, “Yes, but I have something he will never have . . . Enough.”

Enough. I was stunned by its simple eloquence, to say nothing of its relevance to some of the vital issues arising in American society today. Many of them revolve around money—yes, money—increasingly, in our “bottom line” society, the Great God of prestige, the Great Measure of the Man (and Woman). So this morning I have the temerity to ask you soon-to-be-minted MBA graduates, most of whom will enter the world of commerce, to consider with me the role of “enough” in business and entrepreneurship in our society, “enough” in the dominant role of the financial system in our economy, and “enough” in the values you will bring to the fields you choose for your careers.

Kurt Vonnegut loved to speak to college students. He believed, if I may paraphrase here, that “we should catch young people before they become CEOs, investment bankers, consultants, and money managers (and especially hedge fund managers), and do our best to poison their minds with humanity.” And in my remarks this morning, I’ll try to poison your minds with a little bit of that humanity.

Over the past two centuries, our nation has moved from being an agricultural economy to a manufacturing economy, to a service economy, and now to a predominantly financial economy. But our financial economy, by definition, subtracts from the value created by our productive businesses. Think about it: while the owners of business enjoy the dividend yields and earnings growth that our capitalistic system creates, those who play in the financial markets capture those investment gains only after the costs of financial intermediation are deducted. Thus, while investing in American business is a winner’s game, beating the stock market before those costs is a zero-sum game. But after intermediation costs are deducted, beating the market—for all of us as a group—becomes a loser’s game.

Yes, the more that our financial system takes, the less our investors make. Yet the financial field is where the money is made in modern-day America, the breeding ground for the wealthiest of our citizens. (If you made less than $140 million dollars last year, you didn’t make enough to rank among the 25 highest-paid hedge fund managers.) When we add up all those hedge fund fees, all those mutual fund management fees and operating expenses; all those commissions to brokerage firms and fees to financial advisors; investment banking and legal fees for all those mergers and IPOs; and the enormous marketing and advertising expenses entailed in the distribution of financial products, we’re talking about some $500 billion dollars per year. That sum, extracted from whatever returns the stock and bond markets are generous enough to deliver to investors, is surely enough, if you will, to seriously undermine the odds in favour of success for our citizens who are accumulating savings for retirement.

Yet the fact is that the finance sector has become by far our nation’s largest generator of corporate profits, larger even than the combined profits of our huge energy and health care sectors, and almost three times as much as either manufacturing or information technology. Twenty–five years ago, financials accounted for only about 6 per cent of the earnings of the 500 giant corporations that compose the Standard & Poor’s 500 Stock Index. Ten years ago, the financial sector share had risen to 20 per cent. And last year, the financial sector profits had soared to an all-time high of 27 per cent. If we add the earnings of the financial affiliates of our giant manufacturers (think General Electric Capital, for example, or the auto financing arms of General Motors and Ford) to this total, financial earnings now likely exceed 33 per cent of the earnings of the S&P 500. While that share may or may not be enough, it seems likely to continue to grow, at least for a while.

We’re moving, or so it seems, to a world where we’re no longer making anything in this country; we’re merely trading pieces of paper, swapping stocks and bonds back and forth with one another, and paying our financial croupiers a veritable fortune. We’re also adding even more costs by creating ever more complex financial derivatives in which huge and unfathomable risks are being built into our financial system. “When enterprise becomes a mere bubble on a whirlpool of speculation,” as the great British economist John Maynard Keynes warned us 70 years ago, the consequences may be dire. “When the capital development of a country becomes a by-product of the activities of a casino, the job of capitalism is likely to be ill done.”

Once a profession in which business was subservient, the field of money management and Wall Street has become a business in which the profession is subservient. Harvard Business School Professor Rakesh Khurana was right when he defined the conduct of a true professional with these words: “I will create value for society, rather than extract it.” And yet money management, by definition, extracts value from the returns earned by our business enterprises. Warren Buffett’s wise partner Charlie Munger lays it on the line:

“Most money-making activity contains profoundly antisocial effects . . . As high-cost modalities become ever more popular . . . the activity exacerbates the current harmful trend in which ever more of the nation’s ethical young brain-power is attracted into lucrative money-management and its attendant modern frictions, as distinguished from work providing much more value to others.”

But I’m not telling you not to go into the highly-profitable field of managing money. Rather, I present three caveats:

Most commencement speakers like to sum up by citing some eminent philosopher to endorse his message. I’m no exception. So I now offer to you new Masters of Business Administration these words from Socrates, spoken 2500 years ago, as he challenged the citizens of Athens.

“I honour and love you: but why do you who are citizens of this great and mighty nation care so much about laying up the greatest amount of money and honour and reputation, and so little about wisdom and truth and the greatest improvement of the soul. Are you not ashamed of this?. . I do nothing but go about persuading you all, not to take thought for your persons and your properties, but first and chiefly to care about the greatest improvement of the soul. I tell you that virtue is not given by money, but that from virtue comes money and every other good of man.”

I close by returning to Kurt Vonnegut’s story, which, when I finally tracked it down, turned out to be a poem. It’s delightful; even better, it’s only 92 words long:

True story, Word of Honor:
Joseph Heller, an important and funny writer
now dead,
and I were at a party given by a billionaire
on Shelter Island.
I said, “Joe, how does it make you feel
to know that our host only yesterday
may have made more money
than your novel ‘Catch-22’
has earned in its entire history?”
And Joe said, “I’ve got something he can never have.”
And I said, “What on earth could that be, Joe?”
And Joe said, “The knowledge that I’ve got enough.”
Not bad! Rest in Peace!

But it’s not time for any of you to rest in peace, or to rest in any other way. Bright futures lie before you. There’s the world’s work to be done, and there are never enough citizens with determined hearts, courageous character, intelligent minds, and idealistic souls to do it. Yes, our world already has quite enough guns, political platitudes, arrogance, disingenuousness, self-interest, snobbishness, superficiality, war, and the certainty that God is on one side or the other. But it never has enough conscience, nor enough tolerance, idealism, justice, compassion, wisdom, humility, self-sacrifice for the greater good, integrity, courtesy, poetry, laughter, and generosity of substance and spirit. It is these elements that I urge you to carry into your careers, and remember that the great game of life is not about money; it is about doing your best to build the world anew.