Everybody, Somebody, Anybody, and Nobody. A poem by Charles Osgood 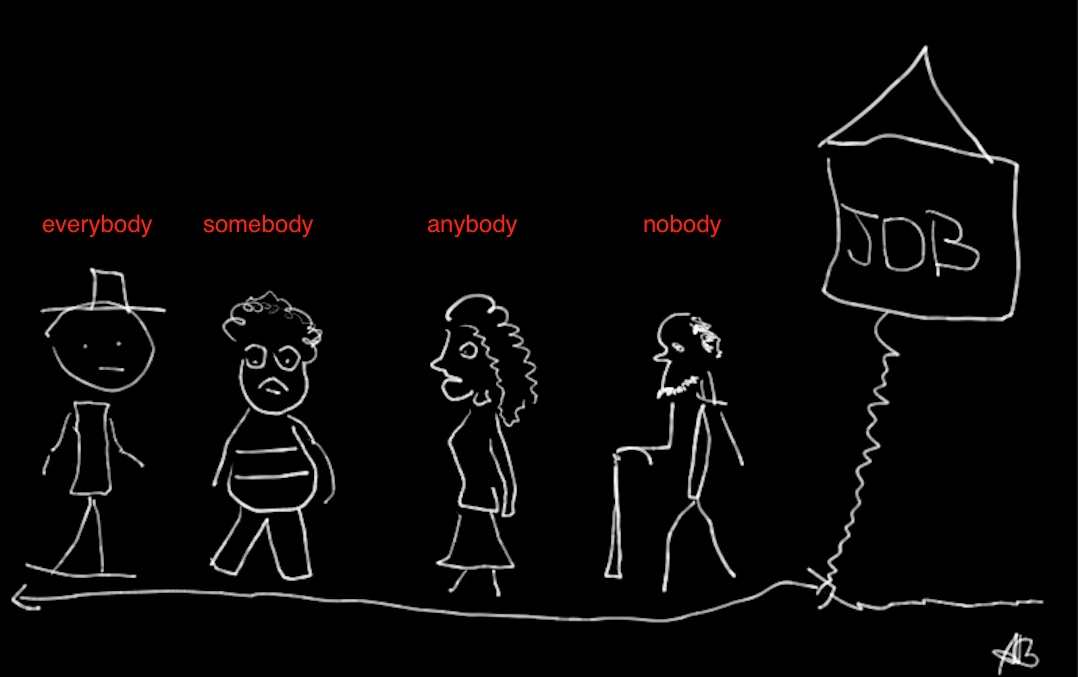 Novelist Erica Jong once wrote: take your life in your own hands, and what happens? A terrible thing: no one to blame.”

On the other hand, what happens if you don’t take responsibility for a “job” that must be accomplished? Well, let’s present this question to four fictional characters described in Charles Osgood‘s poem: Everybody, Somebody, Anybody, and Nobody.

There was an important job to be done and Everybody was sure that Somebody would do it.

Anybody could have done it, but Nobody did it.

Somebody got angry about that because it was Everybody’s job.

Everybody thought Anybody could do it, but Nobody realized that Everybody couldn’t do it.

It ended up that Everybody blamed Somebody when Nobody did what Anybody could have.

“There was a most important job that needed to be done,
And no reason NOT to do it, there was absolutely none.

But in vital matters such as this the thing you have to ask,
is WHO exactly will it be who’ll carry out this task.

ANYBODY could have told you that EVERYBODY knew,
that this was something SOMEBODY would surely have to do.

NOBODY was unwilling, ANYBODY had the ability,
but NOBODY thought he was supposed to be the one.

It seemed to be a job that ANYBODY could have done,
If ANYBODY thought he was supposed to be the one.

But since EVERYBODY recognized that ANYBODY could,
EVERYBODY took for granted that SOMEBODY would.

But NOBODY told ANYBODY that we are aware of,
That he would be in charge of seeing it was taken care of.

And NOBODY took it on himself to follow through and DO,
What EVERYBODY thought that SOMEBODY would do.

When what EVERYBODY needs so did not get done at all,
EVERYBODY was complaining that SOMEBODY dropped the ball.

ANYBODY then could see it was an awful crying shame,
And EVERYBODY looked around for SOMEBODY to blame.

SOMEBODY should have done the job and EVERYBODY would have,
But in the end NOBODY did what ANYBODY could have.

Does it sound familiar to you? Do you know one of these fictional characters?

Keep it real. Sweat Your Assets.

Have you enjoyed this article (#101)? Don’t miss upcoming ones. Subscribe for free to my monthly newsletter here.