In defence of speculation 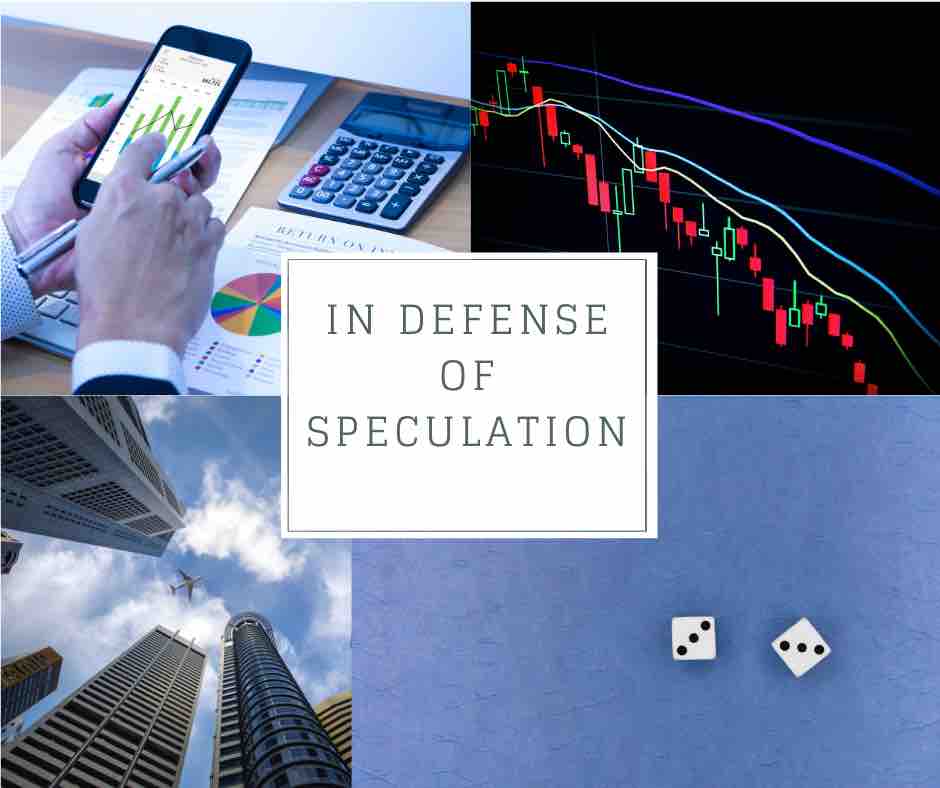 Is there something intrinsically wrong with speculation? I don’t think so. This statement might sound provocative and raise a few eyebrows. Indeed, it is common sense to refer to speculation as bad, dangerous and…risky. Therefore, it should not be a recommended strategy. Right?

Indeed, in a previous article (here), I had already outlined the differences between gambling, speculating and investing, suggesting to rather focus your investment strategy on long-term investments.

However, for individual investors, I believe it is still important not to dismiss speculation (or speculative trading) for two reasons: (a) many investments still hold a certain component of speculation; (b) investment management requires a certain tactical degree of speculation. Therefore, if we don’t fully understand speculation, we incur the risk of misunderstanding or overlooking the underlying speculative aspects of investing. As perfectly expressed by Jason Zweig on the WSJ,”You Can’t Invest Without Trading. You Can Trade Without Investing”. So, let’s dig further.

The speculative aspect of investing

According to the father of Value Investing Benjamin Graham, the prototypical defensive investor is:

“…one interested chiefly in safety plus freedom from bother”. For Graham, “an investment operation is one which, upon thorough analysis, promises safety of principal and a satisfactory [or ‘adequate’] return. Operations not meeting these requirements are speculative”.

In his book Intelligent Investor he admits, however, that “...some speculation is necessary and unavoidable, for in many common-stock situations, there are substantial possibilities of both profit and loss, and the risks therein must be assumed by someone.”

Thus, without getting lost in semantics, we can conceive this statement: many long-term investors, even those who buy and hold for decades, may still be classified as speculators, except for the rare few who are primarily motivated by income and safety of principal and don’t plan to sell the asset for a profit.

Al Frank, author of Al Frank’s New Prudent Speculator, push the discussion further: “all so-called investing in common stocks is a form of speculation”. I believe it is important […] in our everyday thinking about the stock market, to be aware and admit that when we trade stocks or buy them for their long-term potential, we are speculators”.

Investment Columnist John Buckingham asks himself “why is the world speculator anathema to so many who find the work investor comfortable and satisfying? Because invest and investment carry connotations of gains and goods without great risks […] But there is no investment–let alone stock market transaction–that does not carry with it chance and risk, and few stocks are bought without the thought of gain. Even allegedly safe “investments” carry several considerable risks. […] It irritates me so much to see advertising, couched in the most dignified words and euphemisms, encouraging investing in the most risky of financial instruments, such as commodities, limited partnerships, derivative, or collectibles. After years of trying to get people to admit they were speculators, I have persuaded only a reluctant few and turned off many who did not want to think of themselves as speculators or what they did with stocks as speculating. Still, I will keep advocating this semantic honesty because it is so important to recognize that critical difference, which will help our outlook, thinking, and strategies.

I believe that the basic rules of Investing are timeless and straightforward. but it can take a long time for small sums to grow into a meaningful nest egg. There is clearly a vaste group of people looking to reach that goal faster. Whether consciously or not, many investors engage in forms of speculation (trading) in an attempt to accelerate their financial journey by scoring quick wins.

There is nothing inherently wrong with speculation provided you (1) know that you are speculating rather than investing, (2) you have an understanding of what you are trading and (3) you don’t risk more money than you can afford to lose.

I feel we can now close the argument. We can recognize we should not fall for a simplistic differentiation between investing and speculation, which could deceive our investment analysis. Upon thorough analysis, an investment operation that promises the safety of principal and a satisfactory return can indeed exist. It is the case for well thought Real Estate Investments and long term investing in the Capital Market, to name a few. However, investments can also be managed to take advantage of current volatility; buying or selling Assets based on market cycles and market advantages is speculative, but it is not an investment anathema. It is indeed an underlying aspect of investing.

I hereby list the key differences between the two approaches.

When I Invest, I have four levels of thinking:

1) I focus on the Asset’s quality and the income I obtain from interests and dividends over the years.

2) I focus on the Asset’s quality and on the potential capital appreciation over the years (wealth creation).

4) I use a hands-off, Passive Income approach, with limited management and supervision of the investment and limited concern on the current market performance.

When I speculate (trade), I have three levels of thinking:

1) I might not necessarily focus on Assets’ quality but on their perceived capacity to increase in value over time due to changes in the markets (scarcity, increased demand, etc.).

2)  I might not focus on the income I obtain from interests and dividends over the years; I will rather focus on its potential for capital appreciation.

3) I need to monitor the market trends. Then, I need to react based on quick opportunities to buy or sell. It is a rather hands-on approach.

Until next time, Invest in Yourself and Sweat Your Assets!