You might have interchangeably used the terms financial security, financial wellbeing, financial independence or financial freedom. The underlying message is the importance for any individual, to the best of his/her possibilities, to build and maintain a sound financial outlook and maximise Maslow’s hierarchy of needs. 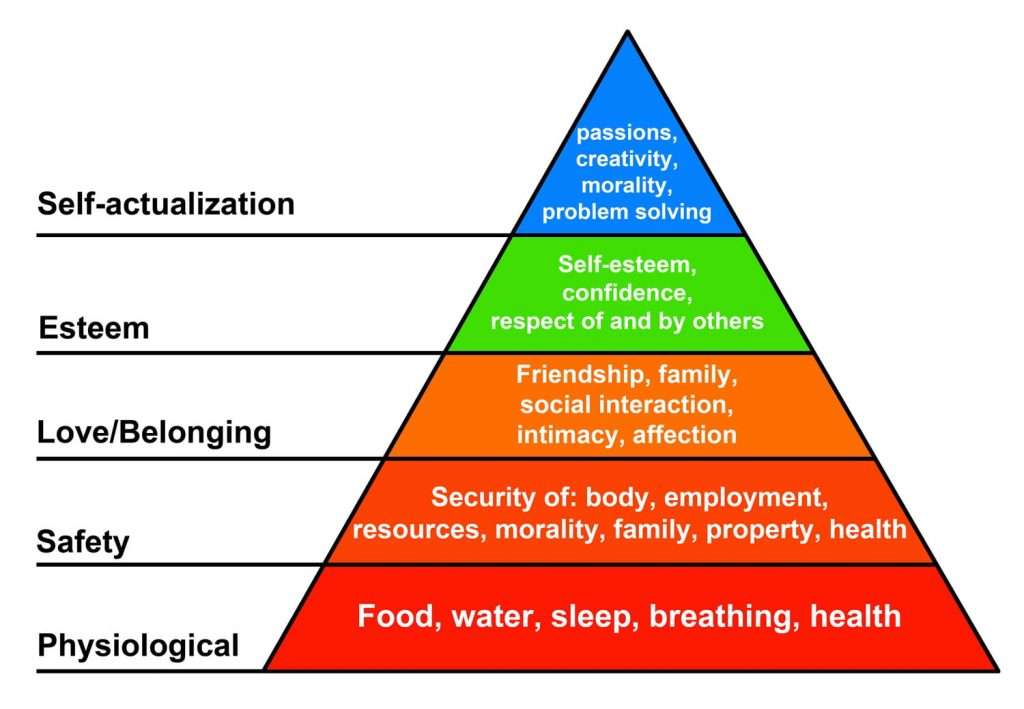 Through my articles on Mindset and Finance, I promote contents and tools to help you achieve your financial goals, relying on your circle of influence (your time, energy and assets). One of the most sought after financial goals is the achievement of financial security during the golden years of our life.

The provision of financial security in retirement is critical for both individuals and societies as most countries are now grappling with social, economic and financial effects of ageing population.

While several governments in the last century developed social security programs and services for their elder citizen, in most countries – independently from the level of development of their economy – that is not always the case, leaving to the single individual the responsibility of building the necessary “nest egg” for his/her future financial needs.

The world is changing at a new speed. We can recognize mega trends such as digitalisation, globalisation, population growth and climate change. Countries, cities, communities are change at a dramatic phase. Jobs are changing as well, with more and more emphasis on non-standard employments. As a result, the provision of adequate and sustainable social protection mechanism over the longer terms must adapt, stay relevant and be sustainable. Now more than ever it is important for all citizens in developing and developed countries, to achieve financial literacy and understand the features of better pension systems.

With this article, I will show you where we stand in terms of the distribution of pensions (retirement plans), as a key pillar of social protection mechanisms. In doing this, I  will highlight any major trend among pension systems of both developed and emerging markets.

While there is no one specific definition of social protection, it is possible to define it as any activity that provides “regular transfers, in-kind or in cash, paid to households or individuals“, such as in the case of public works programmes, old-age pensions, child benefits and conditional cash transfers (with the only exclusion of health support services).

In high-income countries social transfers (and taxes) result in reduction of inequality. The same does not yet apply in most low- and middle-income countries, where investments in social protection are still too limited to have a significant impact on aggregate inequality. The effects on inequality are important, as inequality has been empirically linked to outbreaks of violence, social conflicts and crime.

WHAT IS A PENSION SYSTEMS or RETIREMENT PLANS

With cases dating back to the roman empire, a pension system could be considered the most classic form of safety net for elder citizens. Known as “retirement plans” in the United States, “pension schemes” in the United Kingdom and “superannuation” plans in Australia and New Zealand, retirement pensions are typically in the form of a guaranteed life annuity. As such, the term pension implies the payments a person (retiree) receives upon retirement, usually under pre-determined legal or contractual terms, thus insuring against the risk of longevity.

The necessity, reach and impact of a pension system largely depends on the specific socio-economic characteristics of each country, region and social cluster where it is executed. While pensions in some countries have grown in recent decades, worldwide, pension systems are under more pressure than ever before because of rising life expectancy, increased government debt, uncertain economic conditions, inflation risk, and a shift towards defined contribution plans.

Due to the variety of policies and socio-economic conditions, it is fair to say that not all pensions are created equals, and it is pretty challenging to consistently compare them. As the OECD stated, retirement-income regimes are diverse ands often involve a number of different programs. Taking into account such complexity, let’s dive into some of its main features and characteristics.

National pension systems are designed based on multi-pillar schemes (saving, redistribution and insurance functions) that guarantee greater flexibility and financial security than relying on one system.

At first, we can highlight two significant distinctions in pension schemes:

1) Employment-based pensions. A retirement plan is an arrangement to provide people with an income during retirement when they are no longer earning a steady income from employment. Often retirement plans require both the employer and employee to contribute money to a fund during their employment to receive defined benefits upon retirement. Pension plans are, therefore, a form of “deferred compensation”.

2) Social and state pensions. Many countries have created funds for their citizens and residents to provide income when they retire (or, in some cases, become disabled). Typically this requires payments throughout the citizen’s working life to qualify for benefits later on. A basic state pension is a “contribution based” benefit depending on an individual’s contribution history. For example, see National Insurance in the UK or Social Security in the United States of America. Many countries have also put in place a “social pension”. These are regular, tax-funded non-contributory cash transfers paid to older people. Over 80 countries have social pensions. Some are “universal benefits”, given to all older people regardless of income, assets or employment record (New Zealand and Mauritius). Most social pensions, though, are “means-tested”, such as Supplemental Security Income in the United States of America or the “older person’s grant” in South Africa.

By looking at the World Bank report titled “Averting the Old Age Crisis“, we can dig further into pension schemes’ objectives, characteristics, and funding channels and read a few pieces of advice.  For instance, the report invites countries to consider separating the saving and redistributive functions when creating pension systems and placing them under different financing and managerial arrangements. The table below summarizes this multi-pillar pension taxonomy (from 0 to 4) by objectives, characteristics and type of participation: 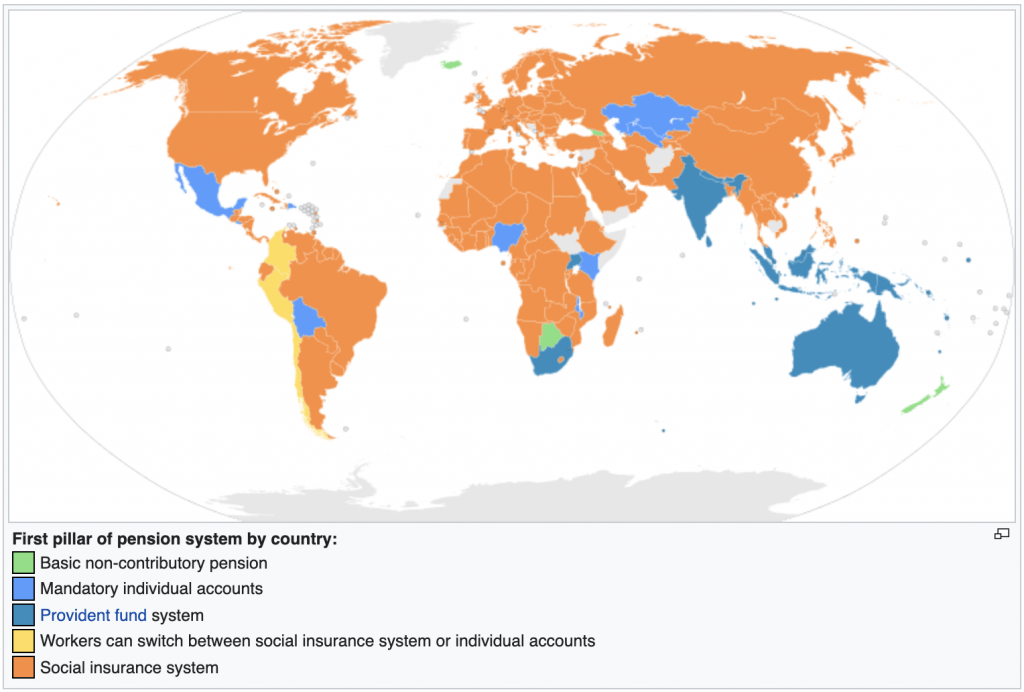 This Map provides a colour-coded detail of the distribution of Public Pensions (Pillar 1) by Country. To access a detailed table of Pension Systems by country visit this Wikipedia page.

In general, a government can rely on four different channels (economic policies) to finance a pension system:

In practice, governments tend to test and adapt a mixed approach of two or more concurrent policies to implement new retirement pension reforms or by differently targeting certain group of persons (by age, income brackets, profession, etc.). Because such programs can cost several percentage of a country GDP, it becomes clear the importance of allocating such funds in the most efficient and impactful way.

According to the Mercer Global Pension Index, the quality of pension systems available to workers varies significantly globally. The Index compares 39 retirement income systems (representing more than two-thirds of the world’s population), covering a wide variety of pension policies and practices. The research highlighted common challenges faced by pension systems around the world.

The Index, built on the same World Bank Framework of five Pillars, is calculated based on three sub-indexes:

1) Adequacy Sub-Index: The adequacy sub-index, representing 40% of a country’s overall index value, looks at how a country’s pension system benefits the poor and a range of income earners. Additionally, the adequacy measure considers the system’s efficacy and the country’s household savings rate and homeownership rate.

2) Sustainability Sub-Index: The sustainability index, which represents 35% of a country’s overall index score, considers factors that can affect how sustainable a country’s retirement fund system. Indicators include the level of coverage of private pension plans, government debt, and economic growth.

3) Integrity Sub-Index: The integrity sub-index makes up 25% of a country’s overall index value. It examines the communication, costs, governance, regulation, and protection of pension plans within that country. It also considers the quality of the country’s private sector pensions because, without them, the government becomes the only pension provider. 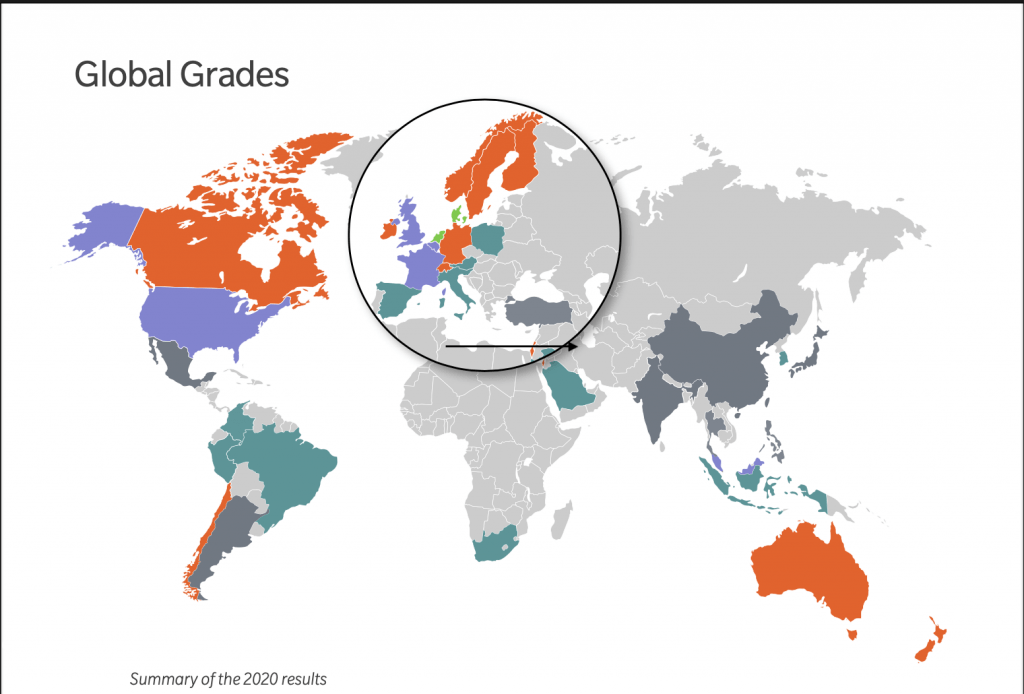 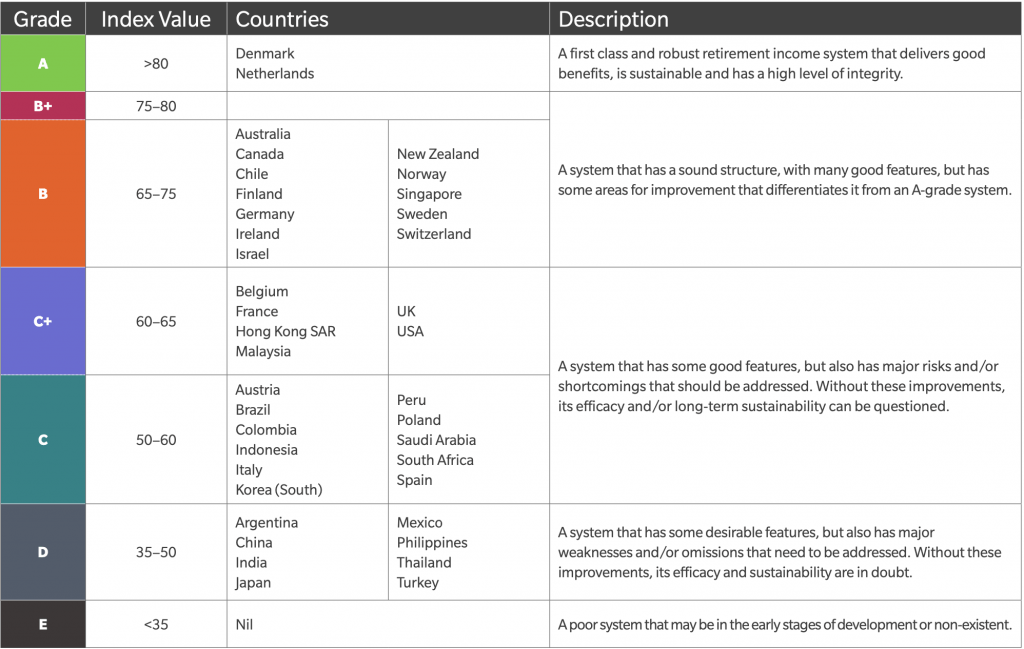 The Mercer Global Pension Index includes recommendations to improve each country’s retirement-income systems, acknowledging that no universal solution exists because each system has evolved from unique economic, social, cultural, political, and historical circumstances.

Common challenges in pension systems around the world could include:

– the importance of increased saving rates

As anticipated, there is a wide variety of models to be studied and tested based on each country’s different socio-economic and political conditions. But, luckily, the goal is the same: to facilitate the necessary financial security and wellbeing for all individuals and communities. What should encourage to mobilize every stakeholder is the knowledge that successful execution of such policies and mechanisms, directly or indirectly, will benefit all of us.