Why the Stock Market is NOT the Economy 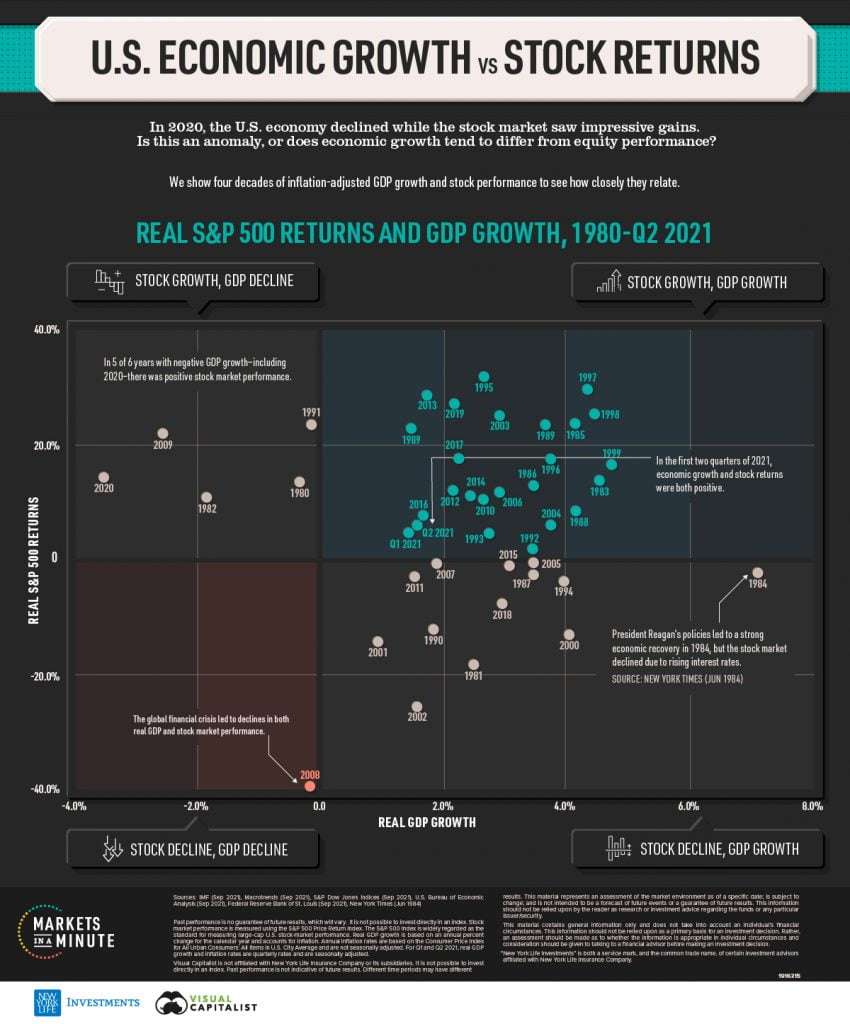 Holding a long-term well-diversified investment strategy implies navigating financial markets during their ups (bull market) and downs (bear market). This strategy requires a firm understanding that in the short timeframe (less than 5 years), markets are irrational and volatile, but over a longer period (10-20 years), the intrinsic value of your diversified investments will equal the market value of its underlying businesses, with the empiric assumptions that the economy grows on average every year. Said that it is equally important to hold your breath looking at the ups and downs of the real economy.  In fact, even the economy has its own cycles, and you can not expect market cycles and economic cycles to go constantly hand in hand.

The article from VisualCapitalist dives into these cases, with a specific focus on the US economy and financial market. Enjoy it!

In 2020, the stock market and the economy had a very public break up. The Wall Street vs Main Street divide—the gap between America’s financial markets and the economy—was growing. By the end of the year, the S&P 500 Index closed at a record high. In contrast, 20 million Americans remained unemployed, up from 2 million at the start of the year.

Was 2020 an outlier, or does the performance of the stock market typically diverge from the economy? In this Markets in a Minute chart above – from New York Life Investments – we show U.S. economic growth and stock market performance over the last four decades, to see how closely the two relate.

Here’s how annual GDP growth and S&P 500 Index (this index represents approximately 500 of the largest U.S. companies, as measured by market capitalization) stack up from 1980 to the second quarter of 2021. Both metrics are net of inflation.

More often than not, GDP growth and S&P 500 Index returns have both been positive. The late ‘90s saw particularly strong economic activity and stock performance. According to the White House, economic growth was bolstered by cutting the deficit, modernizing job training, and increasing exports. Meanwhile, increasing investor confidence and the growing tech bubble led to annual stock market returns that exceeded 20%.

In the selected timeframe, only 2008 saw a decline in both the stock market and the economy. This was, of course, caused by the Global Financial Crisis. Banks lent out subprime mortgages, or mortgages to people with impaired credit ratings. These mortgages were then pooled together and repackaged into investments such as mortgage-backed securities (MBS). When interest rates rose and home prices collapsed, this led to mortgage defaults and financial institution bankruptcies as many MBS investments became worthless.

Moving in Opposite Directions

What about when the Wall Street vs Main Street divide grows? Historically, it has been more common to see positive GDP growth and negative stock performance. For example, real GDP grew by a whopping 7% in 1984 due to “Reaganomics”, such as tax cuts and anti-inflation monetary policy. However, the stock market declined as rising treasury yields of up to 14% made fixed income investments more attractive than equities.

On the other hand, in five of the six years with negative GDP growth, there have been positive stock returns. The most recent example of this is 2020. Real GDP declined by 3.5%, while the S&P 500 returned almost 15% net of inflation.

The Stock Market is not the Economy

There are a number of reasons why the stock market may not necessarily reflect what is happening in the economy. While many factors are at play, these points below can help explain the Wall Street vs Main Street divide.

While many factors are at play, the above can help explain the Wall Street vs Main Street divide.

Since 1980, these time periods of differing performance have never lasted more than three consecutive years. In fact, one economist described the stock market and the unemployment rate as two people walking down the street, tethered by a rope.

”When the rope is slack, they move apart. But they can never get too far away from each other.”
—Roger Farmer, University of Warwick economist

After their public breakup in 2020, the Wall Street vs Main Street divide appears to have healed. In the first two quarters of 2021, both the stock market and the economy saw growth. Perhaps it’s easiest to sum up their relationship in two words: it’s complicated.