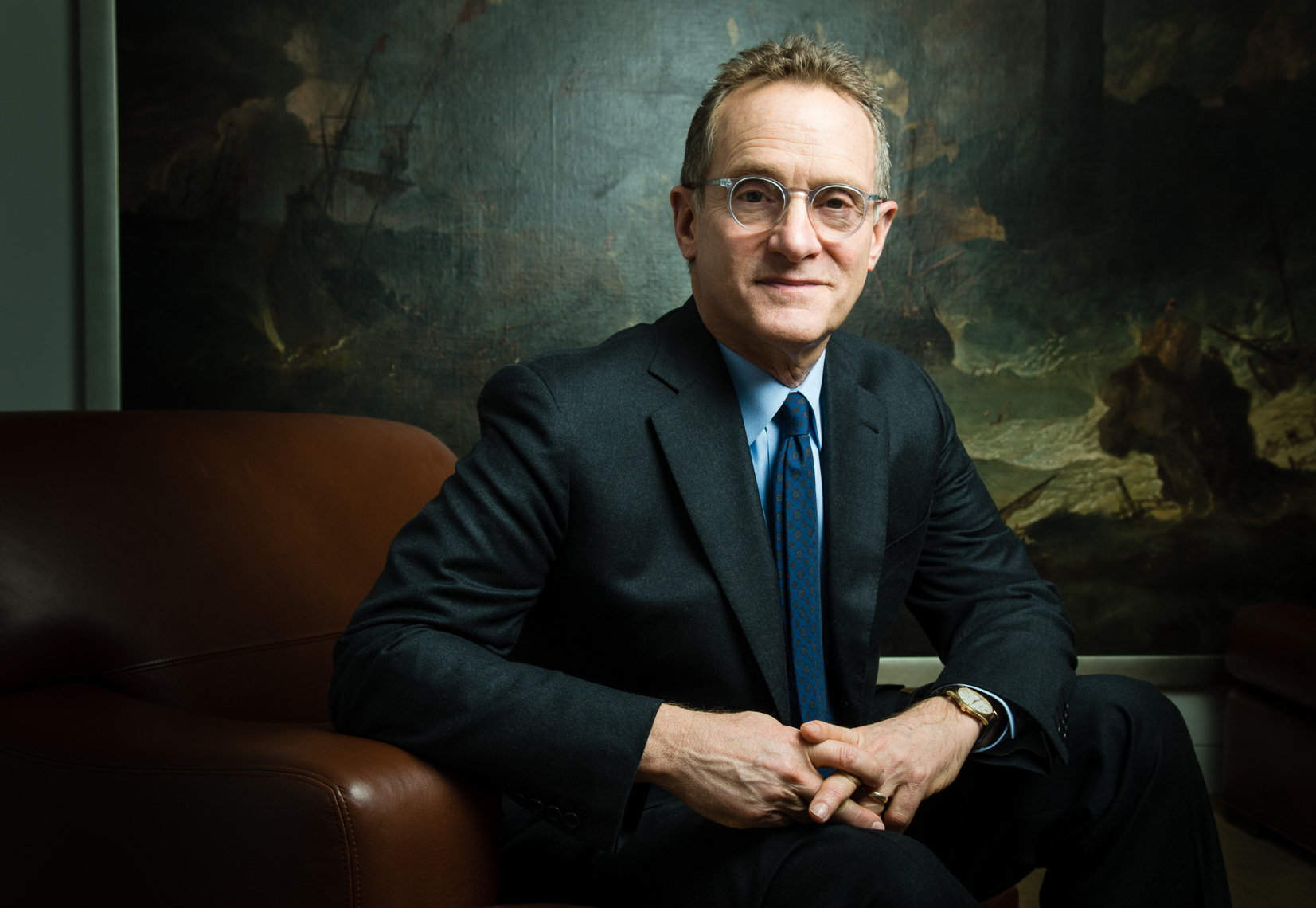 Is it a good time to invest? This is definitely a common question among investors. Everyone would like to know what the market will look like in the near future. However, as Warren Buffett used to say: the only value of stock forecasters is to make fortune-tellers look good. What an investor can opt for is to embrace the mindset of Haward Marks: (1) look for a clear understanding of where we are now in the market cycle, (2) develop an above-the-average understanding of future tendencies and (3) position our portfolio accordingly. But who is Howard Marks? He is not one of those popular American investment gurus: he is the CEO and co-founder of Oaktree Capital Management, a company that focuses on a particular niche market: distressed debt and equity. In Howard Marks’ words, he helps companies with good business but a bad balance sheet. In the last 40 years, his analysis (Memos) has been closely studied by clients and great investors like Warren Buffett.

In his recent publication – Mastering the Market Cycles, getting the odds on your side – he distils his experience in analysing the nature of cycles and how to better position an investment portfolio for what is likely to happen.

For Howard Marks, investing is a matter of preparing for the financial future. We assemble portfolios today that we hope will benefit from the events that unfold in the years ahead. One of his philosophy’s foundational elements is the conviction that we can’t know nor predict what the “macro future” looks like in terms of economies, markets, and geopolitics. We may never know where we are going, but we’d better have a good idea of where we are in the economic cycle.

The author suggests investing our time and energy in 3 areas:

On such information, investors assemble their portfolios with the immediate goal of holding investments offering the best available value proposition: the assets with the best ratio of upside potential to downside risk. The author suggests properly positioning a portfolio for what’s likely to happen in the market in the years immediately ahead by optimising the balance between aggressiveness and defensiveness. Such optimisation should then be calibrated over time in response to environmental changes and where several elements stand in the cycles.

In the investment world, he states that investors talk about risks as:

Risk is the main moving piece in investing: the way investors collectively view risk and behave regarding it is extremely important in shaping the investment environment. We must understand which attitudes toward risk stand in the cycles and act accordingly. Overall, the author summarises risk as the possibility of things not going as we want. In life, like in investing, there can be many different outcomes: uncertainty and risk are inescapable. As such, the future should be viewed as a range of possibilities and, hopefully, based on insight into their respective likelihoods, as a probability distribution that will guide our actions. While superior investors – like everyone else – don’t know exactly what the future holds, they do have an above-average understanding of future tendencies.

The best way to optimise our portfolio’s positioning is by deciding what balance it should strike between aggressiveness and defensiveness by calibrating the amount invested, its allocation, and the riskiness of each investment. If we are getting value cheap, we can be aggressive. If we are getting value expensive, we should pull back. The odds change as our position in the cycles changes.

In the graphs below, Howard Marks shows the changes in returns based on the positioning: favourable vs unfavourable cycles.

THE MECHANICS OF CYCLES

Let’s now dive into the mechanics of cycles. Howard Marks states that some patterns and events recur regularly in our environment, influencing our behaviour and lives. We regularly use our ability to recognize and understand patterns to make our decisions easier. Economies, companies and markets also operate according to patterns. Some of the patterns are commonly called cycles. Cycles vary in terms of reasons and details, timing and extent. Still, the ups and downs will occur forever, producing changes in the investment environment and the behaviour called for. They arise from:

2) from the ups and downs of human psychology and the resultant human behaviour.

Cycles are not as regular as expected. As such, they are also not dependable and predictable. Otherwise, there would not be such thing as superiority in seeing them. Nevertheless, if we pay attention to cycles (listen to cycles), we can come out ahead, and we have less of a chance of being blindsided by events. In an investor who listens in this sense, he will convert cycles from a wild, uncontrollable force that wreaks havoc into a phenomenon that can be understood and taken advantage of.

Howard often shares this drawing among his clients to explain cycles and their phases:

a) recovery from a low extreme

c) achievement of a high extreme

d) downward correction toward the midpoint

f) achievement of a low extreme

g) once again, recovery from a low extreme, in the direction of the midpoint

h) again, the continued swing passes the midpoint and lead toward new extremes 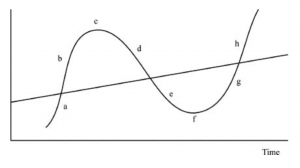 The cycles oscillate around the midpoint. The midpoint of a cycle is generally thought of as the secular trend, thought of as the norm, mean, and in some sense, the right and proper. The extremes of the cycle are thought of as aberrations or excesses to be returned from, and generally, they are. While the thing that’s cyclical tends to spend much of the time above or below it, eventual movement back in the direction of the mean is usually the rule and is called: the regression toward the mean, a powerful and very reasonable tendency in most walks of life.

Interesting to say, the swing back from a high or low rarely halts at the midpoint, regardless of how “right” the midpoint may be. For example, markets rarely go from underpriced to fairly priced and stop there. Usually, the rising optimism that causes markets to recover from depressed levels remains in force, causing them to continue to overprice.

As Mark Twain is reputed to have said, “history doesn’t repeat itself, but it does rhyme”. The sentence helps in understanding the cycles in finance and financial crises: they vary in terms of reasons and details, and timing and extent, but the ups and downs will occur forever, producing changes in the investment environment and thus in the behaviour that is called for.

It is important to understand that:

The themes that provide warning signals in every boom-bust are the general ones:

Let’s look at a few consequences in the investment environment:

As such, those who invest in the first stage will buy assets at bargain prices, from which substantial appreciation is possible. In contrast, those who buy at the third stage pay high prices for the market’s excessive enthusiasm and lose money as a result.

For Howard Marks, (1) the investor’s goal is to position capital to benefit from future developments. (2) In the absence of the ability to see the future, it is necessary to understand where the market stands in its cycle and what that implies for its future movements. Economies and markets have never moved in a straight line in the past, and neither will they do so in the future. And that means investors with the ability to understand cycles will find profit opportunities. (3) Knowing where the pendulum of psychology and the cycle in valuation stand will give us an edge to act in front of opportunities: It is, in fact when dealing with pronounced extremes that we should expect the highest likelihood of success. (4) To refuse to buy when optimism and prices are too high, and to buy when panic creates bargains; quoting Sir John Templeton: to buy when others are despondently selling and sell when others are greedily buying requires the greatest fortitude and pays the greatest rewards”.

Howard Marks ultimately believes that markets will continue to rise and fall, and he thinks to know why and what makes these movements more or less imminent. He will never know when they will turn up or down, how far they will go after they do, how fast they’ll move when they turn back toward the midpoint, or how far they’ll continue on the opposite side. But he believes that the little we know about cycle timing will give us a great advantage relative to most investors.

If you are looking for other great books and review on Personal Finance, Investing, Personal Development or Intentional Living, have a look at my Book Library.